Details on the 3DO PBUS / Player Bus. This is the bus used to communicate with control pads, flight sticks, light guns, mice, and other peripherals. 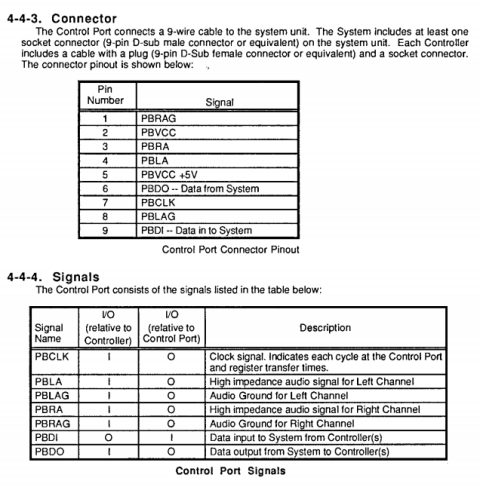 Taken from the FZ-1 Technical Guide 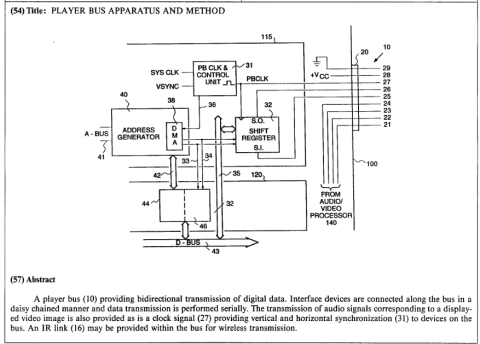 Since the above described arrangement permits 448 bits to be
transferred per field and the minimum bit transfer per device is
8bits, a maximum of approximately 56 devices can be on the bus at
one time.

Each of the player devices has an ID code embedded in its response
data. An ID code is mapped by software in the system to the number
of input and output bits for the device identified. Since the ID
code is embedded, it is received by the system 100 both at
initialization and when data is being read in under normal
operation. In this manner, it is possible to reconfigure the
system (add or delete devices) without re-initializing and without
adversely affecting those device already on the line.

The first 4 bits of data stream received by the system 100 from
each device is that device's basic identification code (ID
code). The embedding of an ID code in the data stream functions as
follows for a joystick 15. The basic joystick 15 will have 8 bits
of data that are (inverted): down, up, right, left, switch-2,
switch-1, fire-2 and fire-1. Using the inability of the joystick
to indicate both up and down at the same time, the ID codes for a
basic joystick are 01QQ, 10QQ and 11QQ, where QQ is 01, 10 or
11. All other devices start with 00QQ. All joysticks are incapable
of generating 00 for their first 2 bits. With regard to the escape
function, the 1100 sequence indicates escape for the joystick. In
all other devices, the escape function is indicated by the bit
immediately following the 4 bit identification code. A string of
zeros indicate the end of input data into the system 100 device.

According to the 3DO SDK's Examples/EventBroker/LightGun/lightgun.c:

From the 3DO SDK's Interfaces/2p5/includes/event.h:

Orbatak has two device types. The trackballs are the same as the regular mouse as described above.

The extra buttons needed for the coin slots, start buttons, and service button are provided by the “SILLY_CONTROL_PAD” as it's defined in the 3DO SDK (event.h).

The 3DO's Portfolio operating system has the ability to dynamically load drivers for peripherals. These “ROM” files, which appear to be AIF files of dynamically loadable code, can live on the filesystem or be sent over the PBUS by the device.

Details about PBUS devices can primarily be found in two locations: